- Lui = The breakpoint location at 2:01 is wrong. Ken Marschall's depiction of the splitting of the Titanic (corner) shows that she split behind her third funnel—at the aft expansion joint located in the aft deckhouse. His depiction is correct, and that location is the confirmed physical breakpoint of the Titanic.
The sinking model splits between the second and third funnels, which is incorrect. The actual Titanic split behind her third funnel, at the aft expansion joint.﻿
- Moi = Not anymore. We know now that the ship broke juste before the third funnel. :)﻿
- Lui = Who is "we?"
The Magical Gamer clearly agrees with me.
It would be physically impossible for Titanic to not have split at her aft expansion joint, which is just behind her third funnel like I said.
There is no other location aboard Titanic which would merit a structural failure of that caliber besides the aft expansion joint between the third and fourth funnels in which the vessel split at.
This is why Titanic is currently sitting ~12,000 ft. at the bottom of the Atlantic in two halves, and uncoincidentally divided at the aft expansion joint.
All depictions and theories speculating the manner in which Titanic sank specifically portray the vessel splitting BEHIND the third funnel.
This one, particularly, is incorrect.﻿
- Moi = By "we", I mean all the people who went to the wreck near 2012. It was found that the Titanic broke between the second and third funnel. A documentary was made at this time, and explained a lot of hidden mysteries, like the fact that the central part litteraly exploded.﻿
https://www.youtube.com/watch?v=FSGeskFzE0s﻿
- Lui = "We" wouldn't include you, however. The pronoun "we" involves you and other people.
And since you mean 'all of the people who visited the wreck in 2012,' that would be a handful of people, in which the data was somehow sufficient enough to formulate another hypothesization about the manner in which Titanic sank in 2012, which also somehow disproved eyewitnesses' accounts of the sinking. You can thank researchers for that.
Because this new CGI rendering of 'how the Titanic sank' portrays the sinking between the second and third funnels with evidence that was 'discovered' has been created, that wouldn't automatically make it 'correct.'
You can't just watch or read a source of information and simply go with it.﻿
- Moi = I don't know why I wrote "we", sorry... I meant "they", of course.
You may "believe" the sinking version you "prefer", of course. :) This new CGI has still a few datas which are false (if we compare with the testimonies), but I believe it for the breaking point. If you are interested (even if you don't believe the "new breaking theory"), History Channel made a new really nice documentary (2012), I think it might interest you. :) Have a nice evening!﻿
Btw I don't knowwhat "breaking theory" will use the team of Titanic Honor & Glory... It would be interesting to ask them.﻿
- Lui = Thank you, and it's okay.
I visited the 2012 CGI depiction and watched the breakpoint, but it still doesn't settle well with me.
Here is my comment that expresses my feelings towards the representation:
"Given that Titanic's aft expansion joint was located just behind the third funnel, beneath the aft deckhouse (due to the expansion joint spanning from B deck to the keel), this depiction of the Titanic splitting between her second and third funnels still doesn't sit well with me, because that was where the significantly lesser amount of the stress caused by the angle in which Titanic sank was situated.
Because there is no central expansion joint, it doesn't make sense to me how Titanic split in that location depicted in the CGI. The aft expansion joint as aforementioned, is located behind the third funnel, which would logically and physically make sense for Titanic to have actually split, unlike as portrayed as 1:16—behind the second funnel (where there is no central expansion joint).
Titanic's aft expansion joint would probably be the only other significant structural location which would've merited a structural failure of this caliber, but apparently this CGI portrays otherwise—that the aft expansion joint was not a sufficient location for a physical breakpoint to occur in this case (as the documentation is sure to reveal).
Because the massive stern section of the Titanic (given its tonnage) would've been supported nearly entirely by the other end of the aft expansion joint at that point during the sinking, this is another reason why I'm saying that Titanic could have actually split behind the third funnel as portrayed in Cameron's movie.
But, apparently, the extensive research and documentation that went into the production of this CGI sequence states otherwise. Just my 2 cents."﻿ 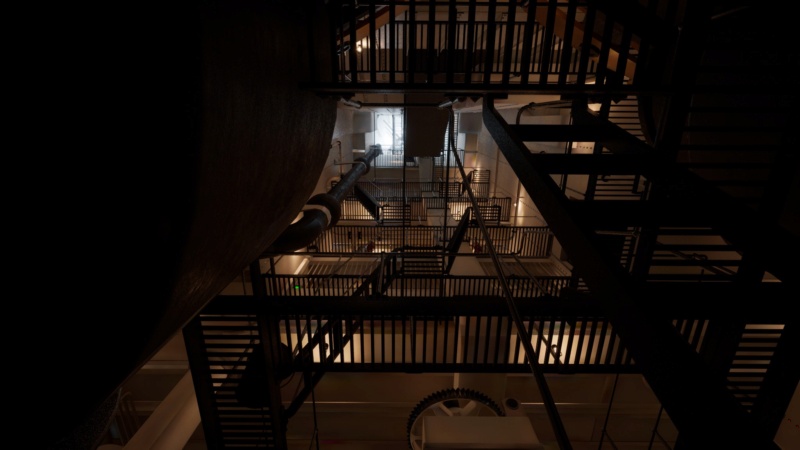 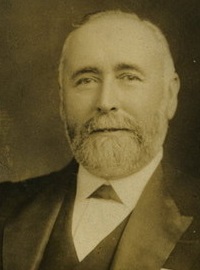 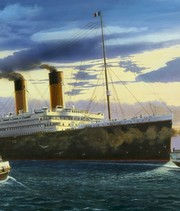