James Paul Moody (Scarborough 21 August 1887 – Atlantic Ocean 15 April 1912) was the Sixth Officer of the RMS Titanic and the only junior officer of the ship to die in the disaster.

Little is known about Moody's early life. He was born in Scarborough, North Yorkshire, England, the son of John Henry Moody and Evelyn Louis Lammin. He went to sea at the age of 14 and attended the HMS Conway nautical training ship at Birkenhead. He later attended the King Edward VII Nautical School in London, gaining his Masters Certificate in April 1911. Moody joined the White Star Line that same year and served on their liner RMS Oceanic (along with fellow Titanic officer Charles Lightoller) before being transferred to the RMS Titanic in 1912 at age 24. At that time he was living with an uncle at St. James House, Grimsby, Lincolnshire.

Along with the other junior officers, Moody received a telegram early in 1912 ordering him to report to White Star's Liverpool offices on 26 March. From there he travelled to board Titanic at the Harland & Wolff yard in Belfast. Titanic then sailed for Southampton to take on passengers. Moody's service as Sixth Officer earned him about $37 a month, although he was allowed his own cabin as compensation for his small salary.

On Titanic's sailing day, 10 April, Moody assisted, among other things, in aiding Fifth Officer Harold Lowe in lowering two of the starboard lifeboats to satisfy the Board of Trade that Titanic met safety standards. He was also in charge of closing the last gangway, and most likely saved the lives of six crewmen who arrived too late to board by turning them away. Once the ship had put to sea, Moody stood the 4–5 PM watch and both 8–12 watches, which meant that he was on watch with First Officer William Murdoch and Fourth Officer Joseph Boxhall when the Titanic struck an iceberg at 11.40 PM on 14 April. After spotting the iceberg, lookout Frederick Fleet rang the warning bell three times and phoned the bridge. It was Moody who answered the call, asking, "What do you see?" Fleet replied, "Iceberg, right ahead!"

In the ensuing evacuation, Moody helped in the loading of Lifeboats No. 12, 14, and 16. While loading No. 14, Fifth Officer Lowe remarked that an officer should man the lifeboat. While the lower-ranked Moody would traditionally have been given this task, he deferred to Lowe. Moody went to the starboard side and gave Murdoch a hand until the water had come on the deck. It was a decision that would seal his fate. Moody was later seen trying to launch Collapsible A, an emergency lifeboat, just a few minutes before the final sinking. He was last seen alive diving into the sea from the bridge, and although his final fate is unknown, it is likely that, like most of Titanic's victims, he succumbed to hypothermia in the frigid North Atlantic waters. Surviving wireless operator Harold Bride who also claimed to have seen Murdoch being washed overboard stated that after the ship sank, he saw Murdoch and Sixth Officer James Paul Moody in the water nearby Collapsible Lifeboat "B," but that they were already dead. Murdoch was clinging to a broken deck chair showing he died from hypothermia. Moody appeared to have a head injury (which prompted Bride to wonder at the time if Moody had been shot.) Moody was 24 at the time of his death. His body, if recovered, was never identified. He was the only junior officer on the Titanic to die in the sinking.

A monument in Woodland Cemetery, Scarborough, commemorates Moody's sacrifice on the Titanic with the Biblical quote, "Greater love hath no man than this, that a man lay down his life for his friends." (see John 15:13)

Sixth Officer Moody was portrayed by Edward Fletcher in the 1997 blockbuster film Titanic. The film depicted Moody admitting steerage passengers Jack Dawson and Fabrizio De Rossi on board the ship only moments before it departed Southampton. Moody appears later in the film and receives the iceberg warning from the lookouts. Moody is last seen in the film during the attempted launch of Collapsible A, and his death is not shown

Je cite le passage important : Claim: In 1954 Harold Bride reportedly claimed to have seen both First Officer Murdoch and Sixth Officer Moody in the water after he was swept overboard with them when the bridge submerged. Murdoch was lying motionless in the water when Bride last saw him, and Moody appeared to have suffered a head injury (which prompted Bride to wonder at the time if Moody had been shot.)

Il faudrait vérifier cette source, mais l'interview semble avoir eu lieu... Le site internet semble lui même démentir cette hypothèse : Aside from the fact that Harold Bride was on the opposite side of the ship from Murdoch and Moody when the bridge submerged, the fact that Bride did not know any of Titanic's officers in 1912 proves the above claim to be spurious. 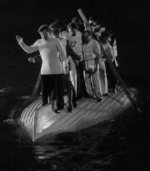 Also
In Loving
Memory of
James Paul Moody
Her Youngest Son
Born August 21st 1887
Gave Up His Life
In the Wreck of the S.S. "Titanic"
April 15th 1912
Greater Love Hath No Man Than This,
That A Man Lay Down His Life For His Friends.