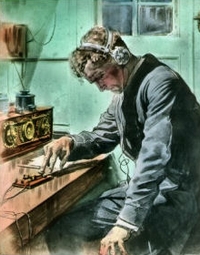 The sea was calm at noon when the watch called out that something could be seen floating ahead. The ship slowed down and it was apparent that the object was an open ship's lifeboat floating in mid Atlantic. What was horrifying is that it contained three prostrate figures. Orders from the bridge dispatched a lifeboat with an officer and a medical officer. What followed was ghastly. Two sailors could be seen, their hair bleached by exposure to sun and salt, and a third figure, wearing evening dress, flat on the benches. All three were dead and the bodies had been tossing on the Atlantic swell under the open sky ever since it had seen the greatest of ocean liners sink. The three bodies were sewn into canvas bags with a steel bar at the end of each. Then one after the other the bodies were draped in the Union Jack, the burial service was read, and they splashed into the sea

The White Star Line has received a marconigram from the Oceanic, dated May 13th, latitude 39.56, longitude 47.01, reporting that she had picked up a collapsible boat of the Titanic containing three bodies. One body was apparently that of Thomas Beattie and the others were a sailor and a fireman. They were committed to the deep. In the boat were also a coat with letters addressed to Richard N. Williams; a can marked "Dan Williams," and a ring with the inscription, "Edward and Gerda." The collapsible boat is the one mentioned by Mr. Lowe in his testimony at Washington as that from which he took twenty men and three women, leaving three bodies. 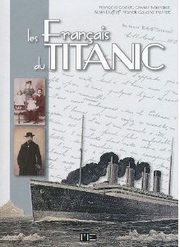