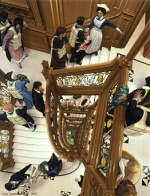 
I expect you will be glad to hear from me once more and to know I am still in the land of the living. Did you manage to keep the news from Mother? I hope you got the cablegram all right.

I never lost my head that dreadful night. When she struck at a quarter to twelve and the engines stopped I knew very well something was wrong. Dr. Simpson came and told me the mails were afloat. Things were pretty bad. He brought Miss Marsden and me into his room and gave us a little whiskey and water. He asked me if I was afraid, I replied I was not. He said, "Well spoken like a true Ulster girl". He had to hurry away to see if there was anyone hurt. I never saw him again.

I got a lifebelt and I went round my rooms to see if my passengers were all up and if they had lifebelts on. Poor Mr. Andrews came along, I read in his face all I wanted to know. He was a brave man. Mr. Andrews met his fate like a true hero realizing the great danger, and gave up his life to save the women and children of the Titanic. They will find it hard to replace him.

I got away from all the others and intended to go back to my room for some of my jewelry, but I had no time. I went on deck. I saw Captain Smith getting excited; passengers would not have noticed but I did. I knew then we were soon going. The distress signals were going every second. Then there was a big crush from behind me; at last they realized the danger, so I was pushed into a boat. I believe it was the last one to leave. We had scarcely got clear when she began sinking rapidly.

We were in the boats all night until the Carpathia picked us up, about seven in the morning. Mr. Lightoller paid me the compliment of saying I was a sailor.

Collapsible Lifeboat D as it is being picked up by the Carpathia. Mary Sloan is believed to have been on this lifeboat.